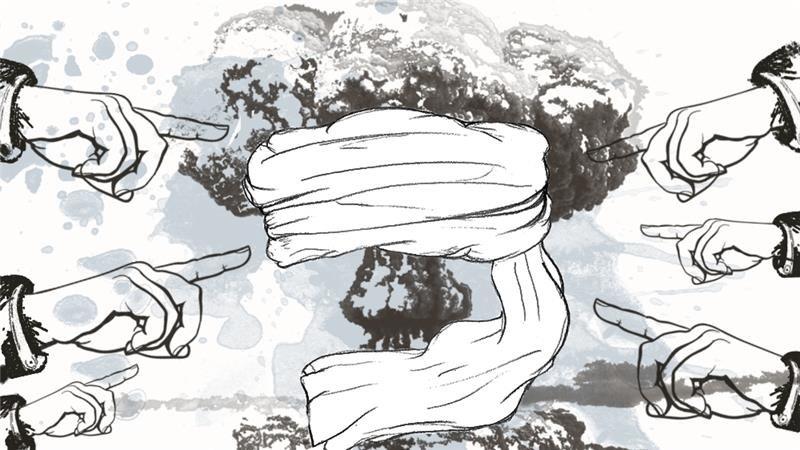 The relationship between the US and the Taliban from the late 1990s onwards was defined by one thing: ignorance.

In the seventh part of his Chronicle of a Caged Journalist series, Egyptian war correspondent Yehia Ghanem explores the relationship between the United States and the Taliban, and the misunderstandings he believes are at the heart of it.

There is a saying that “man is an enemy to that of which he is ignorant”. It seems to perfectly sum up the relationship between the Taliban and the US during the late 1990s.

I recall in the autumn of 1997 interviewing the Taliban’s acting prime minister, Mullah Mohammed Hassan Akhund. He would later become the deputy to Mullah Omar, the spiritual leader of the Taliban.

During our conversation, he received what seemed to be a very important phone call. Wanting to give him some privacy, I stood up to leave the room. But he motioned to me to remain and then put the call on loudspeaker.

The person on the other end of the line appeared to be appealing to him to issue a travel permit for Osama bin Laden, so that he might move from the capital Kabul to Kandahar, in the south of the country.

When the call was over and we returned to our interview, I thought it impolite to inquire about the implications of the conversation I had overheard and, indeed, why he had wanted me to hear it.

But, with the faintest of smiles on his face, he told me: “I bet you wonder why I allowed you to listen.”

Then, he continued: “I just wanted you to be a witness to the real status of Sheikh Osama here in Afghanistan. He is a dear guest until the end of time. Yet, as much as we are honoured to have him among us, he must know that he is to be protected by us Afghans; we are the only masters of this country.”

At that time, Bin Laden had hardly any influence over the Taliban beyond some agricultural and infrastructure projects he was financing.

Al-Qaeda was Wahhabi, a Sunni movement that calls for a return to the earliest sources of Islam, including the Quran and the Hadith, the sayings of the Prophet Mohammad. It began as a popular revivalist movement instigated by the 18th century theologian, Mohammad Ibn Adb al-Wahhab, aimed at reversing what he perceived to be the moral decline of Muslim societies and the innovations in Islam. He felt that there was a gulf between the established and clearly defined teachings of Islam’s religious texts and the popular practice of the faith, including religious festivals, mourning ceremonies and the mystical teachings of Sufism.

But Sufism is deeply ingrained in Afghan society and the Taliban were not immune to this. There were many instances when I witnessed members of the Taliban participating in practices that would have been anathema to the Wahhabis – venerating saints and visiting shrines. If asked, they wouldn’t have identified themselves as Sufis, but the influences seemed clear to an outside observer.

The West, however, seemed unaware of this, assuming that the Taliban were Wahhabi and, therefore, influenced by al-Qaeda and its leader, Bin Laden. It was an error that would deepen the rift between the West and the Taliban, eventually turning imagined enemies into real ones.

But this wasn’t the only difference between al-Qaeda and the Taliban. They also had fundamentally different aims. While the first sought to establish a unified State of Islam that crossed existing borders, the second wanted to establish an Islamic state within the borders of Afghanistan. Where one’s aspirations were global, the other’s were only national.

During a conversation in 1996 with a prominent Pashtu tribal chief and leader of the Hezb-e Islami political party, Gulbuddin Hekmatyar, who was not a member of the Taliban but whose ideology was similar to theirs, about being allied with Wahhabis in the fight against the forces of Soviet ally and former president, Mohammad Najibullah, he told me: “Once we finish with Communism, we will focus our war on Wahhabism.”

But it wasn’t until 1998 that the Taliban grew hostile towards the US, after Washington instigated a series of UN Security Council resolutions condemning it.

To make matters worse, this coincided with the return of the foreign Mujahedeen who had fought in the war between the Serbs and Bosnians. Many would join the ranks of al-Qaeda.

I had met some of them in Bosnia, growing to know them well and witnessing the way in which their attitudes towards the US started to shift. But theirs is a story for the next installment.