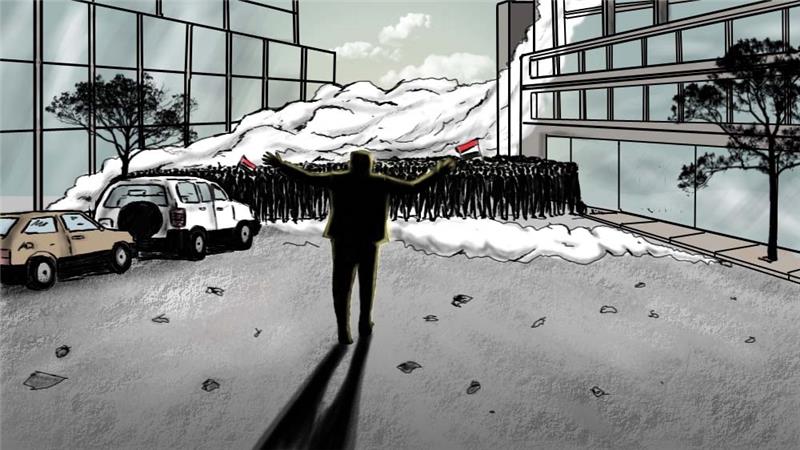 During the Egyptian revolution, demonstrators marched on Al-Ahram threatening to burn it down, I knew I had to stop them

Egyptian journalist and war correspondent Yehia Ghanem remembers the day the Egyptian revolution came to the doorstep of his newspaper. Read the rest of his series, Caged, here.

In the days that followed January 26, 2011, the showdown between the Egyptian people and the government continued. And while the number of demonstrators in Tahrir Square grew, the uprising was not confined to Cairo. In the city of Suez, the crowds were also swelling. As the security forces grew ever more aggressive, the number of casualties rose.

The Muslim Brotherhood responded by reversing an earlier decision, issued just days before, that followers could participate in an individual rather than organisational capacity and, instead, urged its members to defend the demonstrators. It marked a significant shift.

Friday, January 28, was designated a “Day of Anger” by the demonstrators. The security forces were ordered to take any measures against them deemed necessary.

A walk through a revolution

With neither public nor private transportation available that morning, I decided to walk to my office in downtown Cairo. The two hours it took by foot from my home to the head offices of Al-Ahram newspaper gave me the opportunity to observe history in the making, to breathe in the air of revolution that had settled upon my city.

As I walked, I tried to estimate the number of demonstrators filling the streets. But my mind couldn’t keep up with the masses; I had never seen anything like it. Demonstrators walked hand-in-hand, one group after another. It was a majestic scene.

It was ironic that while the young upper and middle-class demonstrators were demanding bread, freedom and social justice, the lower-class youth I witnessed that day had just one word on their lips: Freedom.

We had long expected a revolution to be led by those for whom bread was a real need. But, instead, it was the wealthy demanding bread for the poor, while the poor simply demanded freedom.

By the time I reached my office, having witnessed the violence meted out by the security forces against the demonstrators, I was certain that Egypt was standing on both the edge of major change and imminent danger.

I went straight to the office of one of the top editorial managers, who was a good friend of mine. He was surrounded by several colleagues and was cursing the demonstrators.

“There’s no way these ignorant people can decide for themselves. It’s the right of the intellectual elite, our right, to rule,” he told those gathered around him. He anticipated a severe crackdown by the security forces, he said.

“Enough bragging over your so-called elite,” I interjected, “and stop referring to the majority as ignorant.”

“Even if they are, who made them ignorant?” I asked.

I cautioned them about what I believed to be the disinformation over the demonstrations being spread in our newspaper and others.

Then I told them what I had witnessed that morning: the millions of angry demonstrators. And I warned them that, just a mile away, I had heard some calling for a march to Al-Ahram’s offices, threatening to burn them down.

His face turned ashen. He returned to his desk and held his head in his hands.

“I would rather say: Is it that wonderful?” I answered him. “Yes, it is amazing. Yet, it could be very dangerous – and unless we make some quick decisions, it could get out of control.”

I left his office and went to my own. From the window, I could see a crowd trying to enter the building. Security guards were holding them back, but it was clear that they could be overwhelmed at any moment. I ran downstairs, meeting a long-time friend and colleague, Ibrahim Sengab, along the way. Together, we made it past security and onto the street, where I mounted a large stone monument to address the crowd as Ibrahim engaged in heated debates with groups of people within it.

The crowd was demanding that members of the editorial board be handed over to them. They were calling for some of them by name.

I identified myself to the demonstrators and one among them shouted to the others: “This is a good man. He is for us, not against us; we should listen to him.”

“Physical harm is never a solution to a problem,” I told the crowd. “Besides, it is a crime by the law, and a sin by our faith. What’s important is to neutralise this machine of disinformation.”

“If you are insistent on having someone from the newspaper’s staff, here I am and here is my colleague, Ibrahim. We are in your hands already, and you can do whatever you want with us.”

There was an expression of horror on Ibrahim’s face as he looked at me.

Under attack – by the security forces

“Stay away from the building. We’re going to storm it and burn it down,” shouted someone in the crowd.

“There’s no need to do that. The paper and the building are state property; it is your property – the loss is going to be yours at the end of the day. Instead, let’s all go to Tahrir Square to support our brothers and sisters there,” I urged them.

After more than an hour of shouting back and forth, they were convinced to march to the square.

Al-Ahram’s headquarters is located on one of the most famous streets in downtown Cairo, Al-Galae Street, It runs southeast until it meets Abdel Monaem Riyad Square, where it then joins with the bigger, more famous Tahrir Square.

We had walked just 200 yards from Al-Ahram when the security forces, appearing from the side streets, suddenly closed in on us and began firing. Snipers were also targeting us.

Myself, Ibrahim and many other demonstrators picked up the wounded and carried them back to the lobby of Al-Ahram.

We would have to find an alternative way to stop a massacre at my beloved newspaper.