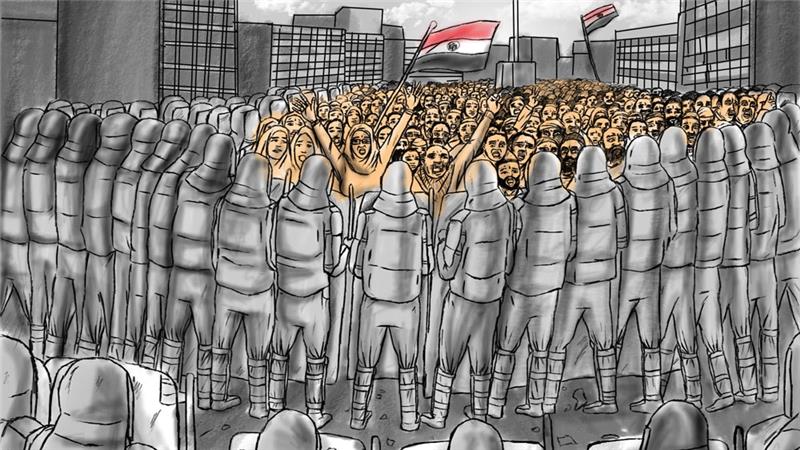 On January 5, 2011, I received a call from Mohamed, the man whom I’d first met as a 12-year-old boy in 1993 when he’d visited my office in Cairo to appeal to me to take him with me to Bosnia. Many years had passed since our first meeting and Mohamed was now a 29-year-old civil engineer, but he spoke with the same passion I recalled from all those years before.

Only this time he spoke in hushed tones about a revolution in our own country: Egypt. It would happen in just a matter of days, he insisted.

I agreed that something was brewing, but I dismissed his notion that it could happen so soon.

“Mohamed, you will never change, you will always be carried away by emotion,” I told him.

But he continued, unfazed.

“I want you to be with us in Tahrir Square on January 25th. This is when the revolution will begin and I know you will not want to miss it,” he whispered.

For a few seconds I did not respond, reflecting instead on his unusual quietness. Then, I said: “If you are correct then it should be your revolution, not mine. It’s the youth’s revolution.”

We were about to hang up, but Mohamed had a few final words he wanted me to hear. “I know you have always loved war coverage,” he said, “but I have also felt that you continued because you knew how much it meant to me, and how I loved following you.

“It was partly my incitement that took you to remote and dangerous places around the world. I’m sure Tahrir Square is closer than those places; you will be there,” he concluded.

Driving home, I recalled my conversation with Mohamed and his friends 17 years before when they’d asked me to take them to the besieged city of Sarajevo so that they might help defend the Bosnians from the Serbs. When I politely refused, they had asked me to take money instead – two years’ worth of savings from their allowances. As I’d watched them leave my office, Mohamed leading his friends from the middle, I’d wished that he would one day grow up to lead our country. Now, I wondered, could it be time for Mohamed – or one of his friends – to make that wish come true?

As I left my office at around midnight on January 25, I noticed a crowd of young people at Tahrir Square. They were surrounded by a massive police presence. I feared for Mohamed.

I took a detour to avoid the Square and called Mohamed. It took several attempts until he answered. Again, his voice was quieter than usual. But I could hear the shouting crowd around him. That was the first time I heard what was to become the slogan of the revolution: “Bread, freedom and social justice.”

I questioned him about the number of people in attendance and what they planned to do next. Would they stage a sit-on or disperse after the demonstration? “No, we are not leaving,” he answered.

My sense of fear deepened. “Whatever violence the security forces use, do not reciprocate,” I warned him.

His response recalled our first meeting when he was just 12. “Remember when you insisted 17 years ago that I should not fear the security forces when meeting you at Al-Ahram [the newspaper where I worked]?” he said. “From that day, I quit fearing the security.

“We will not reciprocate no matter how violent they become, but we will not go home without restoring the dignity of the people.”

I later heard on the radio that the security forces had used force to disperse hundreds of the demonstrators, injuring many of them. I tried to call Mohamed, but his mobile phone was switched off.

The following day, I had agreed to appear on a late-night television programme. I had a few hours between finishing work and the show, so I decided to see what was going on in Tahrir Square.

The moment I stepped into the Square, I was overwhelmed by the sense of enthusiasm that pervaded it. Some people were standing, others were sitting, all were singing and cheering.

At that point and for the next two days, there were no demands that the regime be toppled. The calls were for social justice and radical reforms. Still, the police clearly outnumbered the demonstrators – who were by now in their thousands.

I moved from one group to another, listening, discussing, sometimes arguing, all while trying in vain to call Mohamed. Then it dawned on me that I’d completely lost track of the time. I had just minutes until I was supposed to be on air. It was a 10-minute walk from Tahrir to the television building overlooking the Nile where the show was to be filmed; I ran it in four.

As I ran, I reflected on what I’d seen and heard. Most of the young people demonstrating belonged to the upper or upper-middle class. Many had been educated in private universities. They came from families that had not suffered from the social and economic injustices inflicted upon the poor. That they should be driven to protest amazed me. Most Egyptians had expected the poorest and least privileged to be at the heart of any revolution. But the people I saw at the Square had resembled Mohamed. Would we finally get what I had dreamed of all those years ago, I wondered; a revolution that combined Mohamed’s bravery with Mordechai’s freedom?

I got to the television studio on time and the show went ahead as planned. But we got halfway through without the anchor even alluding to what was unfolding just a few hundred metres away in Tahrir Square. When I interrupted her to express my dismay about that, she seemed both angry and embarrassed. “Why not [talk about it]?” she responded. “It’s a free country and you are talking to a free media.”

At first, I spoke about the youth in the Square, risking their lives for the rest of us, demanding “bread, freedom and social justice for the underprivileged, not for themselves”.

But then I began to address the president directly. “I appeal to you to set your strategies and to draw your policies to the heartbeat of these youth; it is their right, it is their country, it is their future,” I said.

“In order to meet the demands of the youth, you, the president, must dismiss the rigged parliament and hold elections that are internationally observed. You should reshuffle the government whose cabinet ministers are limited to wealthy businessmen from your own entourage.”

Glaring at me, the anchor asked: “Don’t you think the Muslim Brothers are behind the mobilised youth in the Square?”

“Not unless we are all liars,” I responded. “We must remember that just the day before yesterday the government claimed to have won all 444 seats in Parliament and that the Muslim Brothers failed to win even one due to their loss of influence with the public. We cannot say one thing, and at the same time say the opposite: two days ago the Muslim Brothers lost all influence, yet today they have all of a sudden gained it back?”

The next morning I received a call from the anchor, who had been a friend for many years. “Regrettably, you are banned from appearing on state TV as of today,” she told me. “You should be grateful it’s just a ban.”