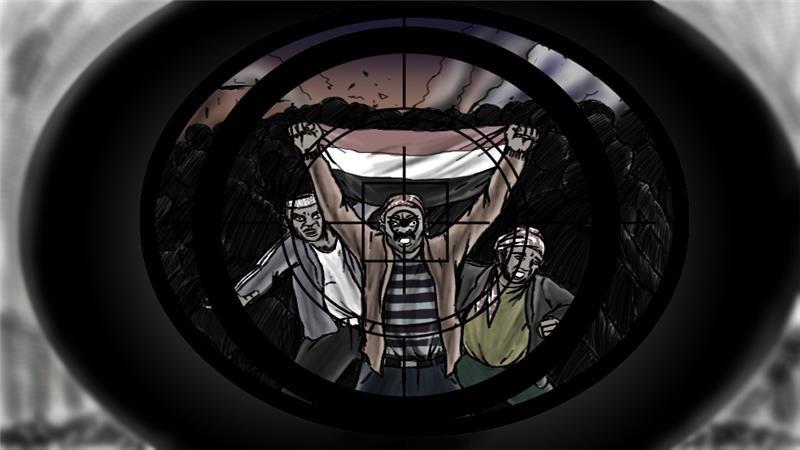 An Egyptian war correspondent recalls some of the most critical moments in the Egyptian revolution, as seen from Tahrir Square.

As Egypt’s revolution progressed, Egyptian journalist and war correspondent Yehia Ghanem was in Tahrir Square with the protesters. Here he recalls some of the most critical moments in that uprising as they were seen and experienced from the Square. Read the rest of this series, Caged, here.

On the night of January 28 – or “Angry Friday” as it became known – mobs of bullies began to circle the protesters gathered at Tahrir Square. On each side of the Square, small groups of 10 to 15 started charging at the demonstrators. It was a test; a way of assessing how those inside the Square would react.

By the following night, more of them had arrived – positioning themselves on the nearby Sixth of October Bridge, on the roofs of buildings overlooking the Square and at the entrances to the streets leading from it. The protesters were under siege.

Behind them, another siege was forming – this one manned by the army.

I sensed that something bad was about to happen; that a massacre was being planned.

But the protesters seemed determined to carry on. For them, the end would come only in the form of freedom or martyrdom. Nothing else would make them budge.

When the bullies began their attack – throwing Molotov cocktails from the tops of buildings and shooting from the Sixth of October Bridge, the protesters could respond only with stones and the bricks they had been able to rip from the pavements. It was an unequal and desperate battle, and the number of casualties within the Square was high.

The following day, the Muslim Brotherhood urged their followers to join the revolution. It was a development that would help the protesters to hold their ground as members of the Brotherhood took over responsibility for securing the perimeters of the Square. They established a primitive but effective early warning system to alert protesters to incoming attacks and a round-the-clock watch inside the Square and along its borders, where they moved in formations of 2×2, 4×4 and 8×8. They were well-organised and efficient.

Beyond Tahrir, President Hosni Mubarak was desperately attempting to put a lid on the boiling cauldron. He dismissed the government of Prime Minister Ahmed Nazif, assigning his long-time air force friend, Lieutenant General Ahmed Shafik, in his place. He also dismissed parliament, which had come into existence 10 weeks before the revolution after rigged elections. And he announced that he had never intended to run for a sixth term as president after his fifth expired in 2012.

But it was by then obvious that the revolution was on auto-pilot and far out-pacing any partial concessions offered by the government. The people wanted Mubarak out and they wanted it now.

On February 1, Mubarak delivered a well-written and emotionally charged speech in which he implored the people to let him stay until the end of his term and to allow him to retire in peace. He wanted to live, die and be buried in Egypt, he explained.

I watched the speech with protesters in Tahrir Square. I could see that some of the older people gathered there were touched by his words. Some even considered leaving. But the majority of the young protesters, including my good friend Mohamed, who I had known since he was just a young boy urging me to take him to Sarajevo so that he might help the besieged Bosnians during the war there, would not even contemplate leaving.

On February 2, yet more bullies appeared. But this time they were riding camels and horses. They charged the protesters, killing some in what became known as the Battle of the Camels.

Later that day, I was quoted on a private television channel, ONTV: “I thought it was staggering politically, but after what happened today, I believe the regime has fallen ethically and morally.”

After the dust settled, those who had been moved by Mubarak’s emotional speech felt betrayed and became even more determined to stay until he stepped down. Moreover, tens of thousands of others who had until that point refrained from joining the protests, came out.

The scene was unprecedented: university professors sitting on pavements besides shoe shiners, street vendors strategising through the night, streets turned into beds and dining tables, where people from all walks of life shared the little bread they had.

But away from the solidarity of the Square, I feared that trouble was brewing.

It arrived before nightfall on February 3, when snipers began firing at protesters from the rooftops of buildings surrounding the Square. As a war correspondent who had covered conflicts in countries across the world, I could tell that these were professionals. Some of those killed were shot between the eyes, in the heart or through the neck. They were lethal strikes that could only be executed with such precision by highly trained gunmen.

And these would not be our only assailants. Word got out that the bullies were surrounding the Square, getting ready for a massive offensive aimed at ending the revolution once and for all.

It seemed we were on the verge of a massacre.