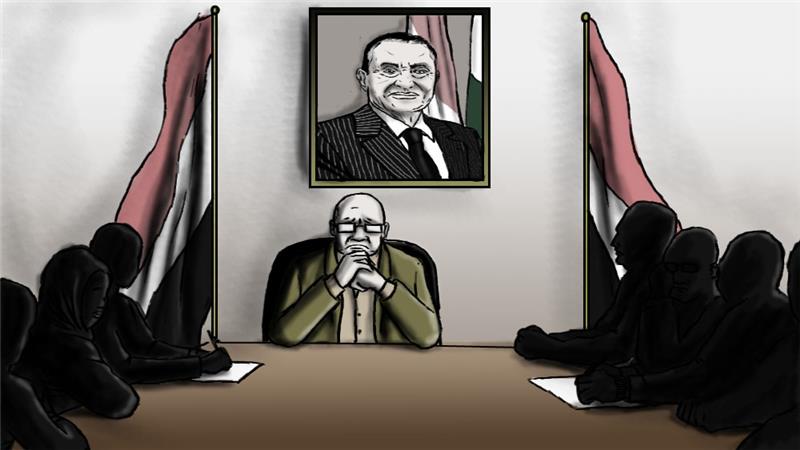 During the revolution, journalist Yehia Ghanem found himself in the middle of crunch meetings with the prime minister.

In this installment of Caged, Egyptian journalist and war correspondent Yehia Ghanem recalls the heated meetings between Egyptian revolutionaries and the country’s prime minister at the height of the revolution. Read the rest of the series here.

By February 4, it had become clear that Hosni Mubarak and the rest of Egypt’s ruling elite were preparing to take extreme measures to end the protests in Tahrir Square and at other spots across the country.

The siege of the Square was getting tighter but I managed to sneak out. I headed towards the offices of Al-Ahram newspaper, where I worked. Along the way, I met a dear colleague, Badawy Negila. I told him about the gravity of the situation in the Square and he suggested that we buy time before a brutal and conclusive crackdown on the protesters by asking one of his close friends, the university professor Yehia Helmy, to mediate between the revolutionaries and the newly appointed prime minister, Lieutenant General Ahmed Shafik. Helmy had long been friends with Shafik and his brother, the then deputy minister of General Intelligence, Mohamed Shafik.

We called Helmy and explained our idea. He was immediately responsive, although the disinformation spread by the media meant that he had little idea of just how serious the situation in the Square was. He asked to see it and, within an hour, was walking through Tahrir with us, talking to demonstrators and discussing their demands. Our guide through these talks was one of the most prominent revolutionaries, Mustapha El-Najjar, a dentist and activist in his late 20s.

Helmy contacted Mohamed Shafik at the Ministry of Intelligence and briefed him on the situation. The sniper fire needed to be stopped, the siege on the Square lifted and the attacks by bullies halted, he told him. Mohamed Shafik immediately called his brother, the prime minister.

An agreement was reached: the government would ensure the safety of the revolutionaries in return for their leaders meeting with the prime minister.

By the following evening, a meeting had been arranged between the revolutionary leaders and the prime minister. It took place in one of the buildings of the Ministry of Civil Aviation near Cairo International Airport, where the prime minister often worked when he could not get to his own headquarters, which were just a few yards from Tahrir Square.

As we drove there, the revolutionaries discussed their fear of disclosing their identities lest they be arrested. But I had been assured by the prime minister that they would be safe. I trusted him to keep to his word, and my confidence had grown since the snipers had stopped shooting the previous night.

When the prime minister arrived, shortly after us, he was casually dressed, as was often the case. He was polite and welcoming. The meeting started at 11pm and continued until 5am the following morning.

After each party made their opening statements, several proposals were put forward regarding disbanding the rallies in Tahrir Square and the surrounding areas in return for guarantees that Mubarak would keep his promise not to run for a sixth term and that his son, Gamal, would not seek the presidency. The revolutionaries also asked for major political, economic and social reforms to be initiated.

It felt like a good starting point, a necessary first step to manage the crisis before deconstructing it.

But the young revolutionaries had lost all faith in the government. They doubted that it would keep its promises and feared that, once they had agreed to disband, they would be arrested and, perhaps, even executed. They were adamant that Mubarak had to step down – now.

After hours of tense discussions, it felt as though we were on board a plane with four faulty engines. I feared we were about to crash.

My greatest concern was that the meeting would end without us setting a date for another.

I took one of the revolutionary leaders to the side and explained that, although they may not have agreed on much, those agreements that had been reached were a good achievement for a preliminary meeting. We owed it to the country and to ourselves to try to build on these commonalities, I explained. Then, I took the prime minister aside to say the same thing.

Both seemed satisfied by this thought, so we parted ways after setting a date for the next meeting.

During the following days, we met on two occasions. Progress was made but it was becoming increasingly apparent that the popular movement on the streets was outpacing us all. More and more people were heading to Tahrir and other squares across the country.

And, perhaps, one of the most noteworthy features of that last week of the revolution was the unprecedented popularity of the United States in Egypt. There were two reasons for this. Firstly, when Mubarak shut down the Cairo offices of Al Jazeera and scrambled its signal, the official US Arabic service to the Arab world, Al-Hurrah TV, stepped in to take its place. Then, of course, there was President Barack Obama’s statement in which he called upon Mubarak to step down for the sake of his country, adding: “When I say today, I don’t mean tomorrow.”

Egyptians suddenly recalled the ultimatum the US had given in 1956 in response to the aggressive moves of Britain, France and Israel towards Egypt after the Egyptian president, Gamal Abdel Nasser, had nationalised the Suez Canal Company, which was owned by a European conglomerate. Although many now see that as having been part of America’s post-Second World War strategy to replace the ageing colonial powers, it was celebrated among Egyptians as an example of a superpower supporting the freedom of all nations. Egyptians were daring to dream that it might be doing so again.