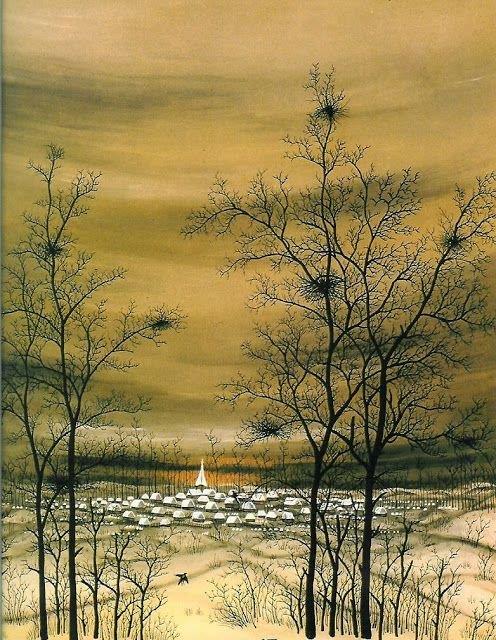 I walked out of the office broken hearted and sat down on a bench in the public park not far from the Croatian Presidency in the heart of Zagreb, the capital of Croatia. It was the summer of 1991 when Serbia had declared war against Croatia immediately after the latter broke away from the Yugoslav Federation. The Serbo-Croatian war was my first assignment as a war correspondent. I began coverage from the Serbian side; then weeks later moved to the Croatian side.

It was obvious at the time that military developments were not going favorably for Croatia. At that point, I made a request for an interview with President Tudman. I was utterly grateful to God when Tudman didn’t only agree to my interview request but also set our appointment just two days after another very important interview in Zagreb I had confirmed, which I thought of as both career and life changing. I have always been a big fan of the fine arts, especially Naïve painting.

One of my favorite artists in that field was Ivan Lackovic (January 1, 1932- August 29, 2004). The story of Lackovic’s life, career, and fame was one so ideal that many of us enjoy listening to, then making a “too good to be true” kind of statement. Lackovic was born to a poor peasant family in the village of Batinske, near Kalinova in the northern part of Croatia. After finishing primary school, he worked as a child laborer in fields and forests. While toiling himself to make a living he taught himself to paint, first with water color and later, in the early 1950s, with oil. After moving to Zagreb in the late 1950s he took a job as a post office worker, then left in 1968 to become a professional painter. From that time until the 1990s, Lackovic became a world figure in fine arts, especially in naïve painting. His works and masterpieces are embraced by more than a hundred prestigious museums all over the world. Even before arriving Croatia, I only dreamed of an encounter with my favorite artist, let alone an interview with him.

Yet, as the old Arabic saying:” Oftentimes, the wind doesn’t always carry your sails in the right direction”, my happiness was short lived. The day before meeting President Tudman, his personal assistant called to let me know the appointment had been postponed for two day. I felt very frustrated with the bad luck of this delay as the rescheduled date conflicted with my meeting with the great artist. While Ms. Skare explained that the reason for postponing was due to unexpected talks with the European Troika mediating a cease fire, I was telling myself that there was no way to reschedule my meeting with the artist since he rarely gave interviews for the media.

Immediately, I ran to Ms. Skare’s office and explained the situation. All I wanted her to do was to get the President to push the appointment to the day after my meeting with the artist. We argued back and forth about this although she knew I was right about Lackovic’s attitude towards the media and that he wouldn’t reschedule. Finally, and with great difficulty, she went into the president’s office and came back within two minutes. I was horrified when I saw her trembling with anger and then began blaming me for requesting that she ask the President to move his appointment forward. It was obvious the President was very upset by my request, and she asked me to leave the office immediately and never come back.

Funny how things can move from one extreme to another; one moment you are flying high thinking you are about to achieve a big journalistic scoop by interviewing a Head of State and the next, you are kicked out on the street.

Two days later I was being led through the home of the great artist. The second floor was used as a huge atelier where Lackovic spent most of his time. The moment I stepped in, I found a crowd of artists whose every name is a heavy weight in the fine arts world, some of whom were being mentored by the great Lackovic. Unlike what I expected, the artist was so welcoming and cheerful. I had no idea until now how Lackovic came to know my experience with President Tudman.

“You know I don’t waste my time with journalists since few have an appreciation for the arts,” he said addressing his fellow artists. “Yet this young journalist forced his respect onto me; he chose to keep his appointment with me – an artist – over an appointment with the President,” he continued talking to his fellow artists before he turned to me.

“Are you frustrated because your appointment with the President was cancelled?” he asked me with a big smile on his face.

“Actually, I didn’t choose your appointment over his; I just refused to ask you to change the time we had agreed to meet. I was then immediately chased out of the President’s office,” I told Lackovic.

“Let me assure you, that you chose right. With all due respect, who is Franjo Tudman? He is just a President who is going to stay in office only for a while and then go. Mr. Ghanem, you chose right and by doing so you have gained my respect” he said while patting my shoulder.

“However, you still seem to be frustrated. Do you still want to interview the President?” he asked.

“Indeed! But how? The instructions were given to never let me get close to the President’s office,” I told Lackovic.

“I’ll take care of this,” after which he picked up the phone and had a short conversation, in Croatian, then turned to ask me: “When would you like to see the President?”

“Anytime,” I said while in disbelieve.

“Anytime is not specific enough. Give me a day and time,” he said impatiently and I did before he ended the phone conversation.

“Sir, is this a joke? Did you just say that you got me an appointment with the President? Were you on the phone with Ms. Skare, the PA of President Tudman?” I bombarded the artist with questions.

“With all due respect, when I want to get an appointment with the President, I talk to him directly, not through his PA,” Lackovic said while laughing loudly.

“What did you tell him?” I asked

“I told him he couldn’t treat a respectable young journalist the way he did, just for the mere fact that he is smart enough to prefer an interview with an artist over an interview with a President. Then, I asked him to receive you as soon as possible,” he told me in a way as if he had done something with great ease.

“Yehia, you did something that most, if not all, your fellow journalists wouldn’t do; you sided with the artist. The least the artist can do is to side with you. It’s time for the President to learn that art will outlive him, as it has leaders and kings throughout history. Son, you did great!” he told me before asking me to begin our interview.

Three days later, and as I was stepping into the office of the President, he lambasted me by saying, “Did you go complain about me to Lackovic?”

“I swear to God I didn’t, and I don’t know how he learned about what happened,” I answered fervently.

“Anyway, even if you did, you went to the right man. Let’s get this interview over with to keep the artist happy,” the President said with a rare ghost of a smile on the corner of his mouth.

For many years afterwards, I remained in constant contact with the great artist who has proven to me that great artists are, no less, great humans. Yet there is another story that was never told of the great Lackovic….